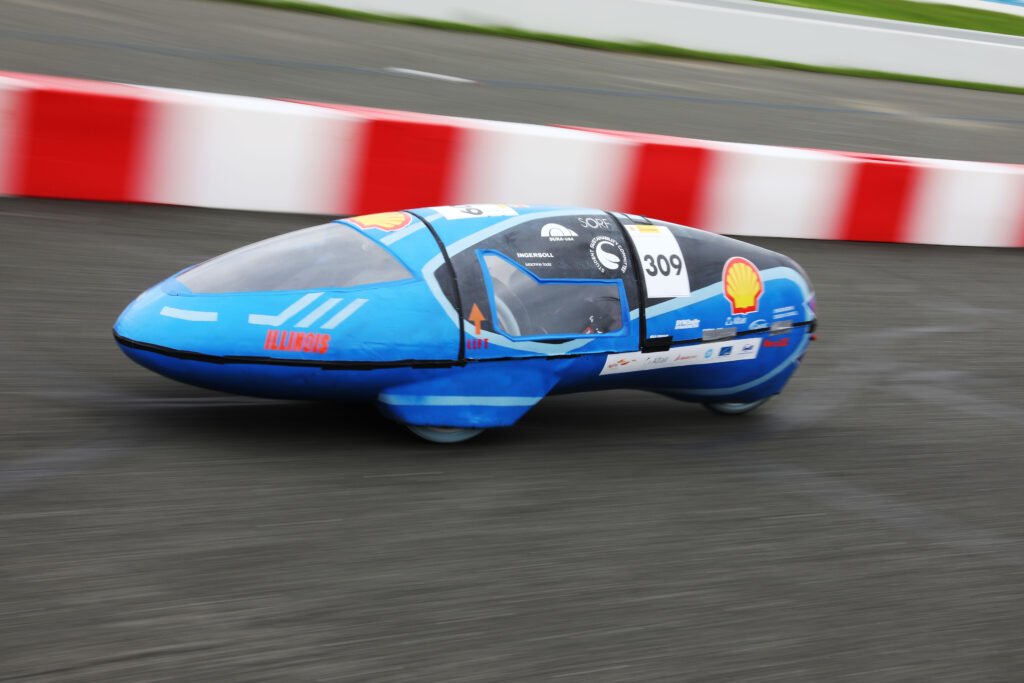 “Imagine being able to drive sustainably from Chicago, IL to Orlando, FL on 1 gallon of gasoline”

Eco Illini Supermileage is the University of Illinois Urbana-Champaign’s premier efficiency SAE team. Our goal is to design, develop, and manufacture the most energy efficient prototype vehicle. Our vehicles compete annually in the Shell Eco-Marathon Americas and SAE Supermileage competitions, recently developing a division-leading battery-electric propulsion system in addition to using a traditional gasoline engine.

What Do We Do?

Our mission is to give our members a place to apply course content to the real-world, develop their technical and professional skills in a small-team setting, and provide them with valuable experiences to obtain a successful career as an engineer or in another field/industry. We aim to emphasize the importance of efficiency across our work, with key emphasis in the following areas: aerodynamics, weight reduction, subsystem design and optimization. We hope to provide all members a new perspective with regards to scope, applicability, and diversity within engineering.

We compete in two competitions. The first is held at the Sonoma Raceway in Northern California: Shell Eco-Marathon Americas. At Shell, we compete both, Gas and Electric Prototype vehicles, with universities in North and South America. This competition is held in the late-Spring.

The second competition we compete in is SAE Supermileage, in Marshall Michigan. We only run our gas powered prototype vehicle at Supermileage, which only takes place during the summer.

The Engineering Student Project Laboratory (ESPL) is our home. We share the lab space with other Society of Automotive Engineers (SAE) teams in addition to Rube Goldberg, iRobotics, and EV Concept. We are extremely fortunate to collaborate with other teams, access wonderful machinery, and get hands-on work. In addition, all of electrical work is done out of the ECE Open Lab, where we work side by side EV Concept.